Dynamic Team-Based PvP and PvE
PANZAR is built on high intensity team-based battles. Players fight in 8 vs 8 PvP fights and extensive breathtaking PvE raids where no one can secure victory alone. The secret to success in battle is how well you coordinate with your other teammates. Itâ€™s ideal entertainment for groups and clans. PANZARâ€™s developed clan system gives you the chance to participate in spectacular mass tournaments for glory and prizes.

Incredibly Detailed Fantasy World
PANZAR comes to life through the raw power of CryENGINE, the ultimate game development platform delivering incredibly detailed graphics and fluid gameplay. Players face off in rich and detailed environments such as mountain waterfalls, jungle villages, ancient castles and temple ruins. PANZAR is flexible, serving a wide range of graphics capability modes, so computers of many generations can get into battle.

Tactical Gameplay Modes
PANZAR has a wide range of locations, equipment and skills creating an almost never-ending variety of tactical options and battle strategies. There are eight different character classes, each with their own unique skill set, game dynamics and overall role within the team. With several different gameplay modes â€“ Domination, Siege, Rugby and King of the Hill – itâ€™s a game youâ€™ll want to play again and again.

Unique Heroes
Players can create their own formidable characters and develop and equip them as they like. You can buy, sell, craft and upgrade weapons, armor and magical potions at any time between battles. Not to mention the nearly limitless freedom of self-expression arising from all the hairstyles, battle cries and armor paint choices. Unleash your imagination!

Advanced Social System
Players can communicate with other players right in-game using voice, team and general battle chat options. Finding new friends, grouping or reconnecting with old ones is simple! There are even gold bonuses on offer for each new friend recruited. Join teams, claim victory and crystals in tournaments, even create your own clan and choose the comrades you will fight shoulder to shoulder with. In PANZAR, there is only one goalâ€¦Victory! 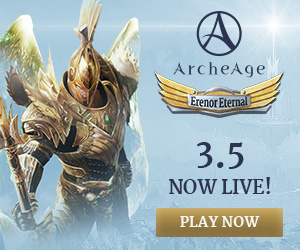 ArcheAge is an epic fantasy MMORPG free of predefined paths and progression. Youâ€™re free to choose your own path and play your way from the starting continents of Haranya and Nuia to the lost shores of Auroria, the birthplace of magic.

This site uses Akismet to reduce spam. Learn how your comment data is processed.

@Twitter Bring back the @OfficialMandox Page! The account got suspended for no reason. We had over 13k followers all organically! #Mandox family, now is the time to show some support! Let’s get our page back! @TwitterCreators @TwitterSupport Better yet make us @verified!

Day 135 of #Joy365 Working on some applications fo

Day 132 of #Joy365 Trusting everything will work o

Load More... Follow on Instagram
I use MOO cards to print my business cards and greeting cards. They have awesome print products and cool design finishes. Click Here to get 20% off your first order!

I use MOO cards to print my business cards and greeting cards. They have awesome print products and cool design finishes. Click Here to get 20% off your first order! DreamHost website hosting

Day 135 of #Joy365 Working on some applications fo

Day 132 of #Joy365 Trusting everything will work o